The Lewa M900 is a pump head with a hydraulically actuated diaphragm made of pure PTFE and a diaphragm holder made of stainless steel. Now the company has further developed the pump head, doubling its volumetric efficiency and adapting it for use with the smaller Lewa Ecoflow models.

The M900 pump head is characterised by its hermetic tightness, high metering accuracy, and robust hydraulics. Until now, however, pump heads of this type could only be used in the two smallest sizes of the Lewa Ecoflow series, the LDB and LDC, up to 100 and 150 bar respectively. The reason for this is that at high discharge pressures with plunger diameters of 5 and 6 mm, they have a comparatively low volumetric efficiency, which is not optimal for the pump's cost-effectiveness and energy efficiency.

Adapted & improved In order to use the M900 for flow rates of less than 1 l/h and discharge pressures of 150-400 bar, the pump head has now been specially adapted for the use with these smaller Ecoflow pump models. By designing an optimised diaphragm body and diaphragm drive, it was possible to reduce the clearance volume in the pump head by 37%, increasing the volumetric efficiency at 400 bar by 20.3 (5 mm plunger) and 17.3 percentage points (6 mm plunger) respectively.

Since reworking the calotte proved to be the biggest challenge, Lewa made a special pump head that provides a view of the otherwise hidden diaphragm and used it to study the diaphragm's movement using laser measurement technology.

The Lewa M900 is a pump head with a hydraulically actuated diaphragm made of pure PTFE and a diaphragm holder made of stainless steel. It is designed for universal use and is used on all Lewa Ecoflow pumps as well as on Lewa process pumps for medium flow rates. The pump head has a whole range of advantages. It is not only hermetically tight so that leakages of pumped fluid or hydraulic oil are impossible, but is also characterised by high metering accuracy, optimum suction capacity due to the diaphragm spring, and a very long diaphragm service life.

Volumetric efficiency The previous M900 diaphragm pump head for plunger sizes of 5–12 mm had a comparatively low volumetric efficiency on the LDB and LDC drive units with the smallest Lewa sandwich diaphragm at high discharge pressures with plunger diameters of 5 and 6 mm. "The reason for this is the clearance volume in the pump head," said Moritz Mildner, RD engineer at Lewa.

The assumption that fluids are incompressible only applies to low pressures. In this case, it must be taken into account that although the reduction in volume for water and hydraulic oil is only about 1% at 100 bar, it increases to about 10 times this amount at 400 bar due to the pressure dependence of the compressibilities.

"As the pressure builds up in the pump, the fluids are compressed until the discharge pressure is reached," Mildner explained. "The result is a reduction in displaced volume equal to the volume reduction that occurs when the fluids are compressed." The ratio of displaced volume to the ideal, theoretical displacement volume is referred to as the volumetric efficiency. If the volumetric efficiency of a pump decreases, its energy efficiency and cost-effectiveness also decrease.

“For this reason, Lewa limited the use of the previous M900 pump heads to 100 or 150 bar. Instead, M200 pump heads with metal diaphragms were used for applications with low flow rate (< 1 l/h) and a discharge pressure between 150 and 400 bar. However, those models do not have some key advantages of the M900, such as lower minimum suction flange pressure or more robust hydraulics due to the diaphragm spring," Mildner explained.

"By designing a diaphragm body and diaphragm drive specifically optimised for the small plunger sizes, we were able to reduce the flow paths in the hydraulics, the installation space of the diaphragm spring, the diaphragm calotte, and the fluid bores on the pressure and suction sides," Mildner said. The geometric optimisation reduced the clearance volume in the pump head by about 51% on the fluid side and by about 22% on the hydraulic side. This equals a total clearance volume saving of 37%.

The greatest challenge Within the scope of the revision, the calotte posed by far the greatest challenge. For its optimisation, the actual diaphragm movement was first studied using laser measurement technology. For this purpose, Lewa produced a special pump head that allows a view of the normally invisible diaphragm in its installed state. "The position of the diaphragm and the diaphragm holder in the front-end position were relevant for the depth of the calotte," explained Mildner. "That is why the diaphragm contour was scanned with the help of two lasers."

One laser was used to determine the current height of the movable measuring device and the second for the deflection of the sandwich diaphragm. In this way, the centre plane was completely measured for plunger sizes 5 mm and 6 mm, and different stroke frequencies. Based on the envelope curves generated from the point clouds resulting from the scans,it was possible to geometrically adjust the fluid working space in the diaphragm body to the actual diaphragm motion.

Volumetric efficiency Next, the research and development team conducted a series of tests to validate the new pump head. The essential functions of the hydraulics, which include gas discharge, sniffing function and pressure limitation, were checked and the volumetric efficiency was determined via the characteristic diagram of the diaphragm pump head.

At the maximum pressure of 400 bar, process water was used to achieve a volumetric efficiency of 40.2% for the 5 mm diameter plunger and 56.3% for the 6 mm diameter plunger. These values were 19.9 and 39% respectively for the previous diaphragm pump head. This shows that the new M900 is suitable for use with the Ecoflow pumps LDB and LDC at low flow rates and up to 400 bar discharge pressure. 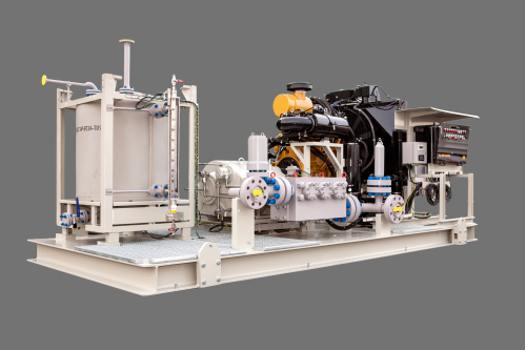 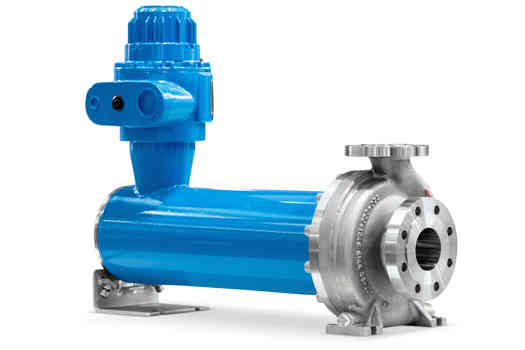