For half a century residents and commerce across eight municipalities of the greater London Area of south western Ontario have received their potable water supply from Lake Huron Water Treatment Plant (WTP) near Grand Bend and over this period the community has been well served. However, in 2017 the Lake Huron Primary Water Supply System (LHPWSS) announced an Energy Audit and Pump Optimization study that identified a significant opportunity for energy savings and the optimization of pump operations for the pumping station.

The outcome of this study has been the modification of the original five pump configuration in the pump station and its replacement with a six pump configuration. This has involved removing three of the original 50-year old 3000hp (2237kW) pumps and replacing them with four high lift pumps from KSB. With the new pumps running on their operational curve, substantial energy savings can be made. As an electrical transmission-connected entity, the LHPWSS was eligible under the Independent Electricity Systems Operator’s (IESO) Industrial Accelerator Program (IEP) for financial incentives for eligible energy efficiency projects.

Four international pump manufacturers submitted bids, but KSB Canada’s submission stood out. Despite being the highest capital expenditure cost by a significant amount, KSB’s submission actually offered the lowest overall anticipated lifecycle cost over 25 years.  This was possible due to KSB’s impressive energy efficiency and creative solution in offering a single type for all four pumps (large and small.) This reduced the spares requirement, in turn reducing the lifecycle cost and providing flexibility to easily increase pump capacity in the future as demand continues to increase. The contract was awarded to KSB Canada, who commenced design and consultation work in 2019. Pump manufacturing began in 2020 and the updated pumping station became fully operational in August 2022.

Located in Southwestern Ontario, along the Quebec City-Winsor Corridor, London is an interesting city as it gets its water source from both Lake Huron and Lake Erie. The Regional Water Supply Division of the City of London (RWS) is seconded to the regional Water Boards and responsible for two major water supply systems, these being the LHPWSS and the Elgin Area Primary Water Supply System (EAPWSS). The LHPWSS services the municipalities of London, Lambton Shores, North Middlesex, South Huron, Bluewater, Middlesex Centre, Lucan-Biddulph and Strathroy-Caradoc from a water treatment plant located north of the village of Grand Bend in South Huron.  The plant has a current treatment capacity of 340 million liters per day (75 million imperial gallons per day) and serves the city’s population of approximately 420,000 people in the eight municipalities, including 80% of the City of London. 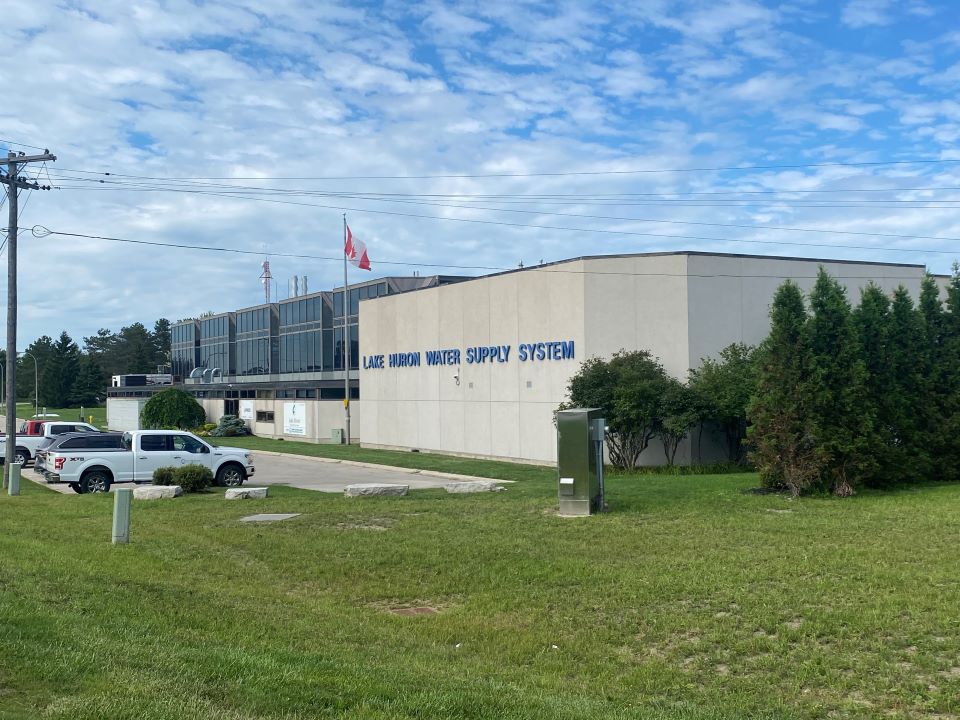 The plant has a current treatment capacity of 340 million liters per day (75 million imperial gallons per day) and serves a population of approximately 420,000 people. -

The pumping station was originally designed for a single pipeline, but later in 1996 and 2014 the RWS partially twinned the 47km main transmission pipeline to a terminal reservoir resulting in the pumps no longer running on their curve.  “After almost 50 years, the existing pumps were becoming inefficient, with the impellers showing signs of pitting. Keeping them operational required a lot of ongoing maintenance because they were running off curve,” reports Billy Haklander, Capital Program Manager, LH&EAPWSS.

To give the LHPWSS the most flexibility in selecting pumps, four pump suppliers were invited to submit separate bids for the small and large pumps and to identify a credit should the LH&EAPWSS decide to source both the small and large pumps from the same supplier. KSB’s bid offered a creative solution using just a single type for all four pumps, with only the impellers and motors being different in accordance with the size of the pump. The base plates for each pump were the same size. The flexibility offered by KSB enabled the capital cost of its bid to be adjusted to account for fewer spares and thereby create savings for the customer.

A significant benefit of the proposal made by KSB was that with the smaller pumps using the same size casings and base plates as the two larger pumps, they had engineered the opportunity to increase the pump size by fitting larger impellers and motors at a future date.  This can be done on site without any civil works needing to be carried out. Thus, if demand grows for the water supply to be increased it can be accommodated with the minimum of cost and disruption to the plant.

Following a 25 year Life Cycle Cost analysis, taking into account the capital cost, energy consumption and maintenance costs made by AECOM Canada, consultants for LH&EAPWSS, the contract was awarded to KSB. Given that the pumps proposed by KSB met the technical requirements and offered the lowest overall anticipated lifecycle cost over 25 years, AECOM and RWS recommended that the proposal from KSB be accepted.

“One of the constraints that we had to take into consideration when evaluating the bidders’ project was ability to conform to the available space in the existing pump hall,” explains Marcus Henderson, KSB National Operations Manager. “With this being an existing installation there was only so much real estate to work with and a key constraint was that the existing pumps were of a bottom suction configuration. Usually, the installation configuration for horizontal split case pumps is in-line with the suction and discharge in the same direction. This meant that we had to find a solution to incorporate bottom suction. We had to undertake some pattern work to incorporate the existing pipework which enabled us to solve the problem.”

The pumps specified were: 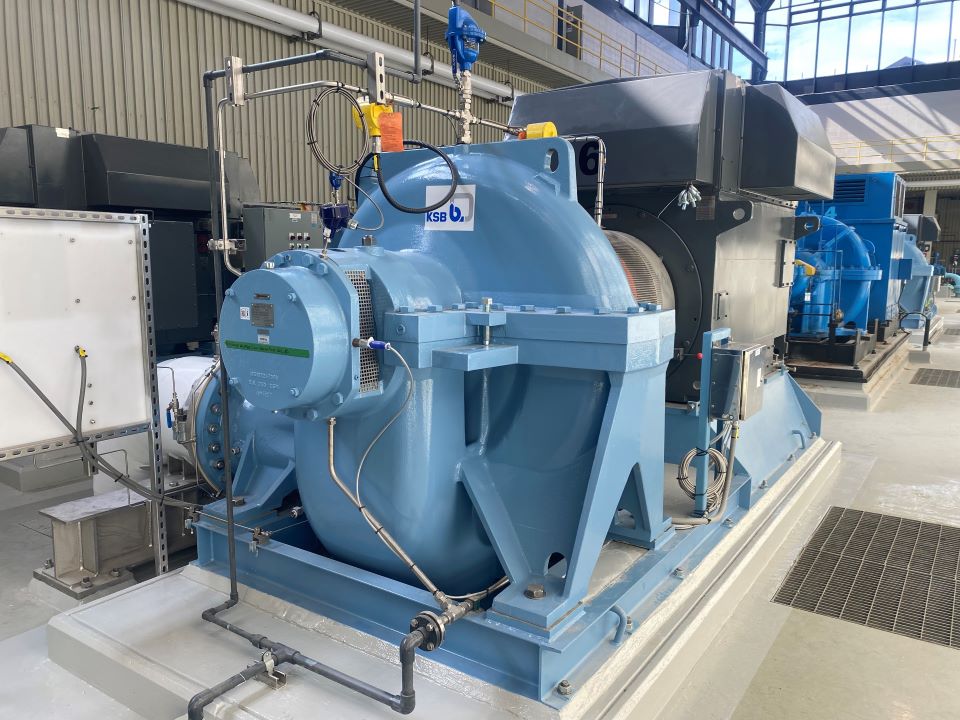 The RDLO pumps are rated for 1,300 L/s or 900 L/sec and each of the pumps’ discharge piping is equipped with a 600mm diameter tilting disk check & throttling valve and isolation ball valve each with a motorized actuator. -

Proven in many water applications around the world, the RDLO pumps were identified as being more than capable of meeting the customer’s specific demands. KSB’s RDLO axially split, single stage volute pumps have been developed specifically for handling raw water, clean water, service water and transport fluids with a minimum of flow resistance. As a result, they lower the energy and life cycle costs of the systems in which they are installed. They also meet the twin demands of reliability and high availability. Reliability results from the casing halves being sealed by solid casing split flanges at the upper and lower casing part, and high availability is attributable to the use of generously dimensioned bearings and high-quality shaft seals. Smooth running is ensured at all times thanks to the flow-optimised, vortex-free intake elbow and rigid shaft with short bearing span. Because the shaft is completely sealed without steps/threads in the wetted area the RDLO offers reliable power transmission.

The combination of solid bearing brackets, a short and rigid shaft and pre-loaded bearings guarantees low vibration and extended operating life for the bearings, seals and coupling. Being axially split case pumps simplifies maintenance procedures, enabling ready access to all parts for thorough inspection. The drive may be positioned on both the left and right of the pump without additional parts or modifications to the casing being necessary. ”Two of the pumps are connected up to 3500 hp motors and the other two to 2500 hp motors. These are the main pumps supplying drinking water to the entire LHPWSS with many customers over 50km away, so they consume a great amount of energy. It is marginal improvements such as these that can improve efficiency by one or two percent, but they work out to big dollars when you consider the overall size of the plant,” comments Henderson.

A significant element of the project was the issue of the pumps delivering energy savings, which involved factory acceptance testing at KSB’s Halle facility in Germany. Henderson explains: “Factory testing involved shipping one motor of each size to our factory and coupling them up to the pumps for string testing and recording the overall pump performance. The motors also underwent type testing under full load in accordance with the IEEE Standard so that they could determine motor efficiency.” He continues: “We took the factory overall power and the data from the motor factory to determine pump efficiency. There were strict penalties on performance guarantees on this project, so if we failed to meet the efficiency guarantees given, KSB would be required to pay LHPWSS the difference in energy costs delivered and  those which were guaranteed over the performance lifetime.”

“It is worth noting that when the pump tests were carried out, they had to be on bare internals. The coatings were only applied after testing, so it was a true test of the raw efficiency of the pumps. Given that coating can improve efficiency by one to two percent we faced some tough conditions.”

“The replacement of fifty-year-old high lift pumps at the Lake Huron Water Treatment Plant will result in significant energy savings and optimization of pump operations. The complexities of this large infrastructure project include the installation of two 2,000hp/1494kW and two 3,500hp/2611kW pumps and associated combination control and isolation valves as well as a medium voltage motor control centre, all while maintaining supply to the utility’s regional customers,” says Haklander.

“Working with KSB and the other vendors throughout a global pandemic provided unforeseen challenges, but I was amazed at how well the project went. The people at KSB in Canada were able to set up and accommodate the virtual site acceptance testing program and their engineers at the Halle plant in Germany were great in providing information when it was requested. KSB was at the front in making it a successful project and their collaboration with the key players, in particular Kenaidan Contracting the general contractor responsible for installing the pumps and the mechanical aspects of the project and overseeing the installation of the electrical components by their electrical sub-contractor Selectra, was greatly appreciated,” comments Haklander.

Henderson explains: “One of the positives to come from this project was that we were able to go ahead with a planned role for a permanent commissioning team. As projects get more complex and extend over longer periods, there is a need for greater consistency, and with this new development we are able to deliver an integrated resource constantly available to our customers.”

This article was written by Bryan Orchard.

KSB boiler feed pump to be used in Chinese plant